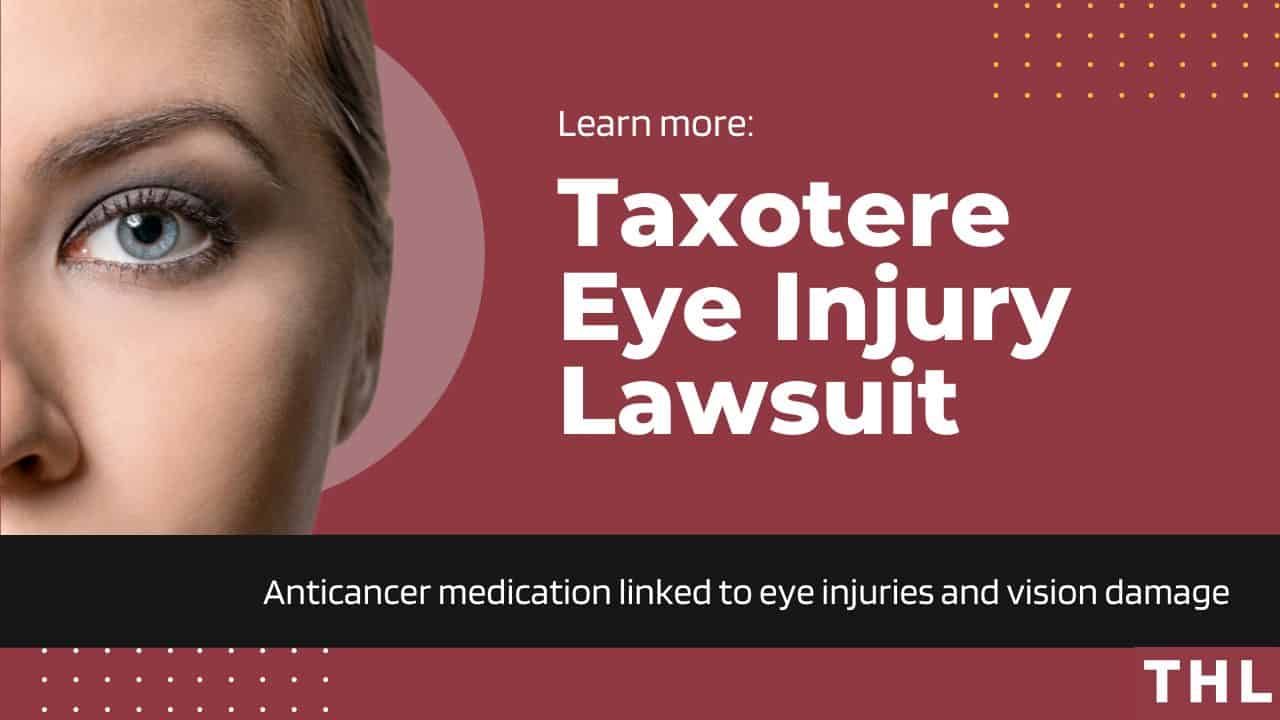 If you or a loved one suffered vision loss or other optic injuries after using Taxotere, you may be eligible to participate in the Taxotere eye injury lawsuit.

Use our chatbot below to receive a free, instant online case evaluation right away to find out if you qualify for compensation for your Taxotere vision injury.

Are there other injuries associated with Taxotere?

Taxotere has been linked to hair loss.

There is currently a lawsuit filed against Taxotere for causing permanent hair loss in patients.

How much does a Taxotere vision injury lawyer cost?

TorHoerman Law operates on a contingency fee basis, meaning our clients do not get charge any legal fees until after they have received compensation for their injuries.

If our clients are not awarded compensation for injuries, we foot the entire bill for legal services rendered.

If our clients are awarded compensation, our fee comes out of part of that award and is considered in the damages.

Do I qualify for a Taxotere eye injury lawsuit?

If you suffered vision injuries subsequent to taking the prescribed medication Taxotere, you may qualify to participate in the Taxotere eye injury lawsuit.

Does Taxotere cause eye injuries?

About the Taxotere Eye Injury Lawsuit 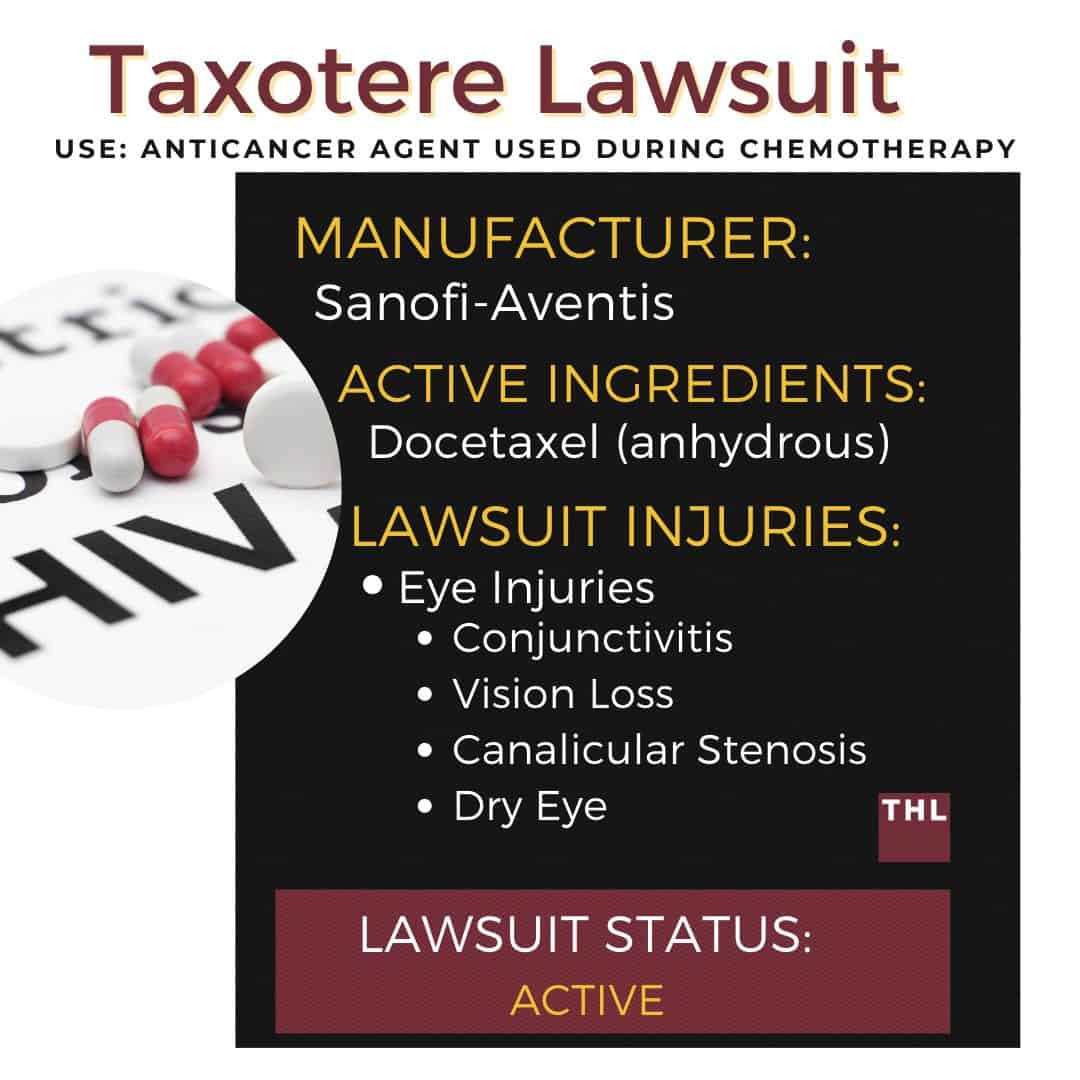 Over 10,000 Taxotere lawsuits have been filed against the manufacturers of Taxotere and docetaxel for hiding long-term and permanent side effects, including eye injury and vision damage.

Since 2019, litigation has been ongoing against the developers of Taxotere.

If you or a loved one experienced severe side effects, such as unexplained watery-eyes and tears, due to the use of Taxotere, you may be entitled to compensation through a Taxotere lawsuit.

You should not need to worry about surprise side-effects from a necessary treatment that will debilitate you further simply because the manufacturer decided not to properly inform you of them.

If you have suffered injuries or losses resulting from Taxotere, you deserve proper financial compensation for these losses.

We understand that you are already going through enough with overcoming cancer, so let us fight for justice against the negligent parties.

Looking for quicker analysis and response?

Use our chatbot below for a free instant case evaluation right now.

Taxotere, also known by its active ingredient docetaxel, is an anticancer agent commonly used during chemotherapy to treat various forms of cancer such as breast cancer, prostate cancer and lung cancer.

Taxotere combats cancer by over-stabilizing the structure of a cancer cell.

This effect prevents the breakdown of cells that create the environment for cell reproducing, thereby reducing the growth and spread of cancerous cells within the body.

Taxotere is part of the “taxane” family of cytotoxic drugs, a class of chemotherapy treatments made from plant alkaloids.

Taxotere was developed by Sanofi-Aventis and first approved for limited use in May 1996 by the U.S. Food and Drug Administration, meant to help treat individuals with locally advanced or metastatic breast cancer.

It was later approved by the FDA for wider use in 2004.

Taxotere is commonly prescribed to treat patients with:

Is Taxotere still in use?

Of the drugs used to treat breast cancer, Taxotere is the most prescribed drug in its class (taxane) – some sources estimate that 75% of breast cancer patients will receive Taxotere as a form of treatment.

Fewer trips to the doctor for treatment make Taxotere more attractive to both patients and doctors.

Taxotere has also been approved for administration outside of the hospital (in 60-100 mg/m2 doses).

As is warned on the Taxotere label, toxic death occurs in around 2% of metastatic breast cancer patients and about 11.5% of patients with other tumor types involving abnormal liver function who are using Taxotere.

Vision Side Effects of Taxotere Usage 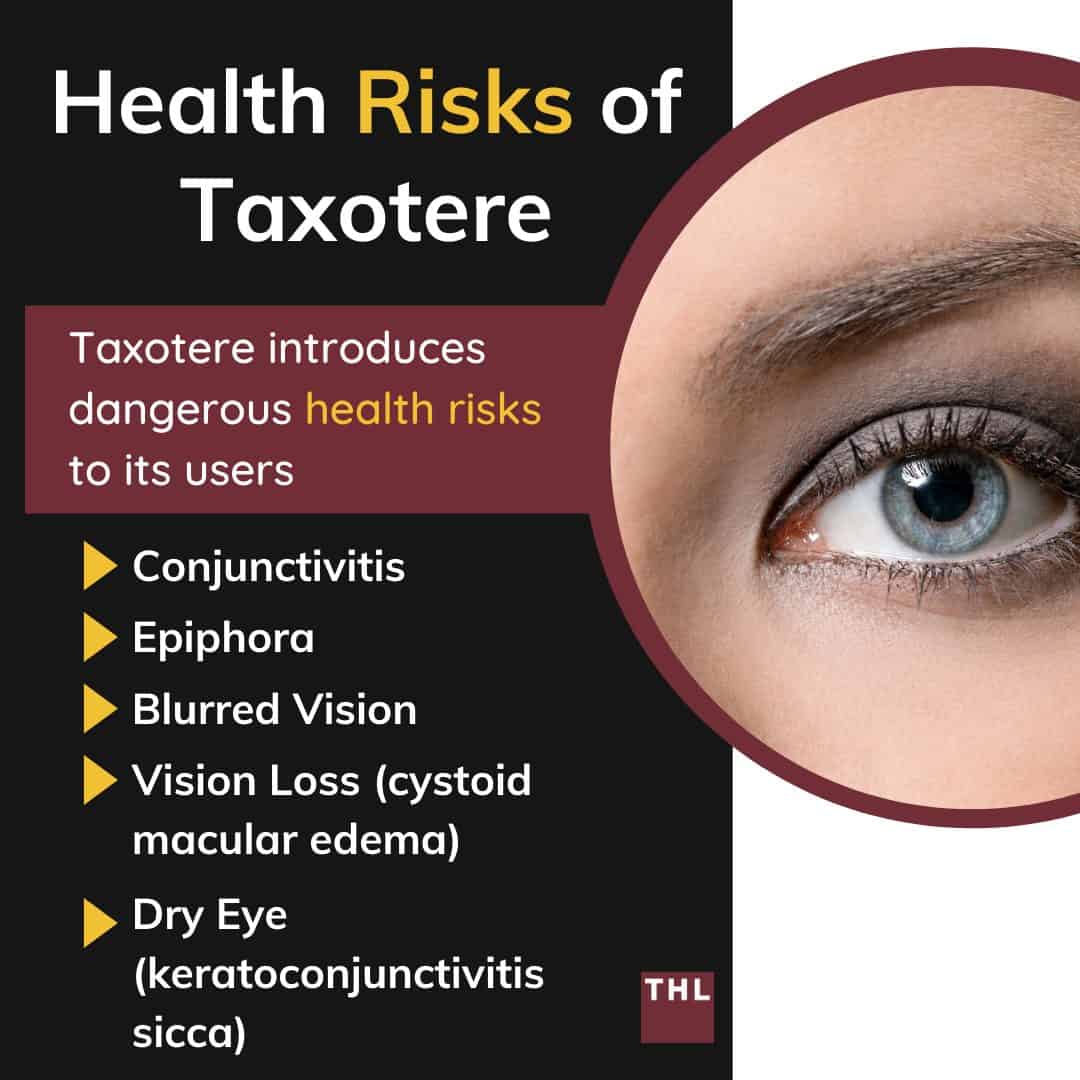 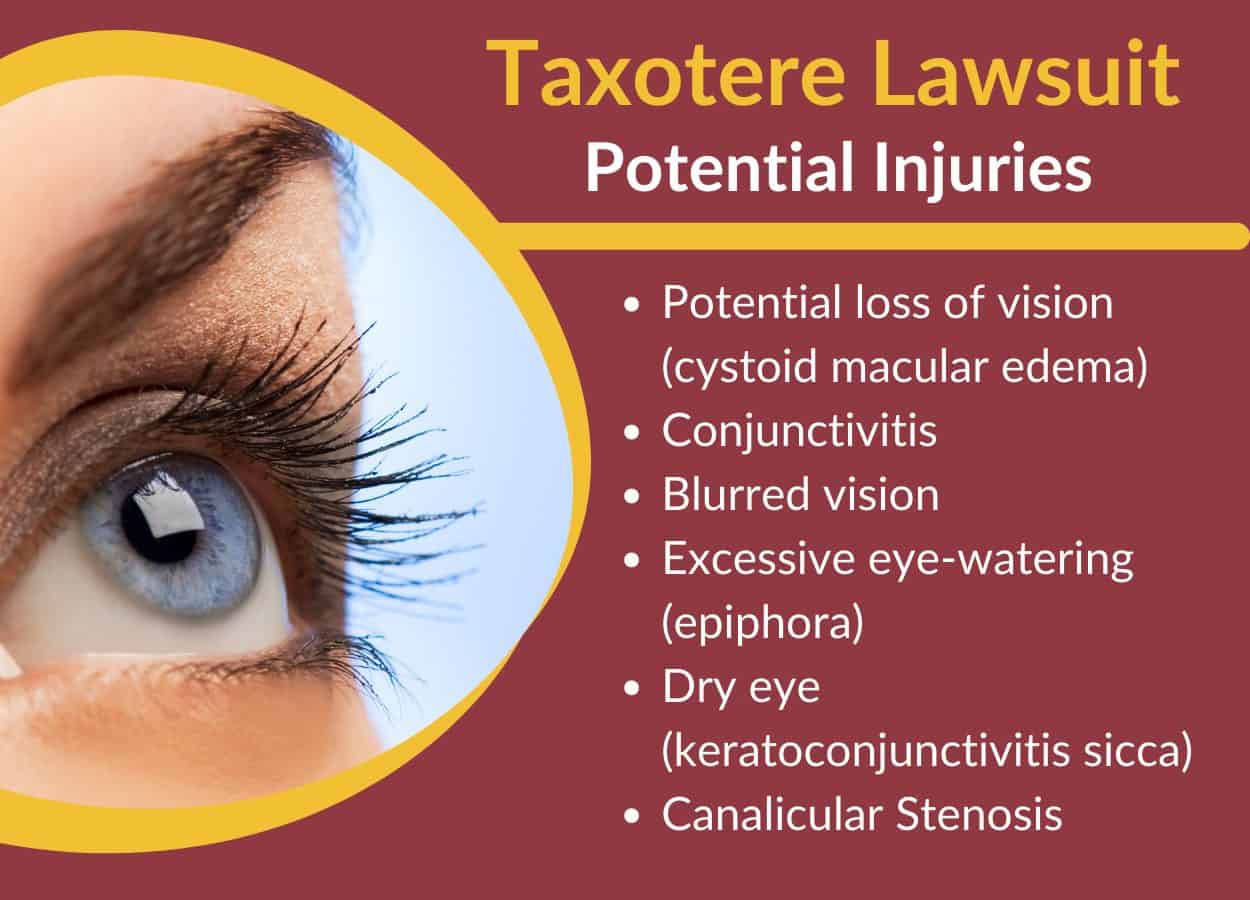 These symptoms and/or side effects can heavily affect the daily activities of patients, including driving, reading, even normal job functions.

Taxotere’s side effects can severely impact an individual’s qualify of life.

How does Taxotere affect my vision?

Taxotere impacts your vision because it affects the lacrimal system in your body when taken for chemotherapy.

The lacrimal system plays an important part in making sure your eyes and vision are healthy by properly producing and draining tears.

It is the system of ducts and sacs that create the tears and then moves them out through the nasal cavity.

Taxotere is secreted into the tear film, which can lead to scarring of certain areas of the lacrimal system causing permanent occlusion.

This means that affected individuals will not be able to drain their tears naturally via their lacrimal system, causing Epiphora or the excessive tearing/watering of the eyes.

When the lacrimal ducts are obstructed, bacteria buildup can occur causing infection that can lead to inflammation next to the eye.

Sanofi-Aventis failed to inform and warn adequately about Taxotere’s vision side effects (especially Epiphora) and, as such, thousands of cancer patients who use the drug for chemotherapy to combat their cancer have to suffer additional long-term damages that can remain after defeating their cancer.

Do I Qualify for a Taxotere Eye Injury Lawsuit?

TorHoerman Law is accepting lawsuits for individuals who have suffered permanent vision damage following the use of Taxotere (docetaxel).

If you've experienced persistent watery eyes and other negative side effects after the completion of Taxotere chemotherapy treatment, contact TorHoerman Law to discuss your legal options today, including the possibility of filing a Taxotere vision injury lawsuit.

If you currently suffer from permanent vision damage or eye-injury and were previously prescribed Taxotere (docetaxel), contact the office of TorHoerman Law for a free, no-obligation evaluation and Taxotere lawsuit consultation today!

Our dedicated team of Taxotere eye injury lawyers will be here to help you every step of the way, answer any questions you may have, and walk you through the steps of your Taxotere vision damage lawsuit.

If you believe that you may qualify to participate in a Taxotere lawsuit, the first step you should take is to mitigate injuries and future potential damages.

You should then familiarize yourself with the civil litigation process so that you know what is to come of your Taxotere lawsuit.

Hiring a personal injury lawyer to act as your Taxotere lawyer is an important step.

Be sure to ask plenty of questions about your potential lawyer’s experience, payment structure, and anything else you deem to be important.

Your Taxotere lawyer will work to build a strong case to prove that liability for your injuries falls on Sanofi-Aventis, the manufacturer.

An experienced attorney will help file legal documents on your behalf and generally work to gain you compensation for your injuries in the form of a settlement or verdict. 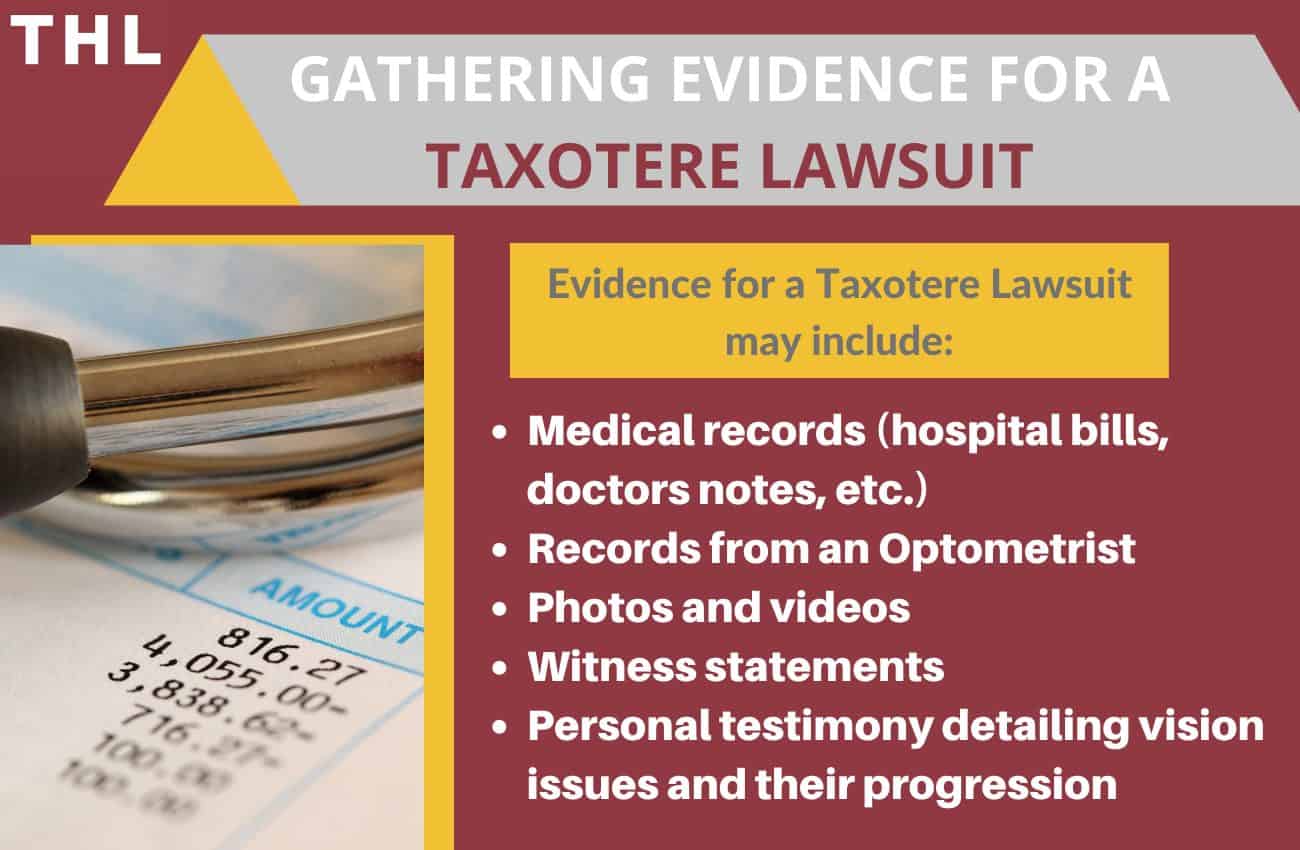 Together with your attorney, you will work to gather evidence to show liability.

Gathering evidence is a crucial part of building a strong case, and includes all tangible things related to your case and related diagnosis. 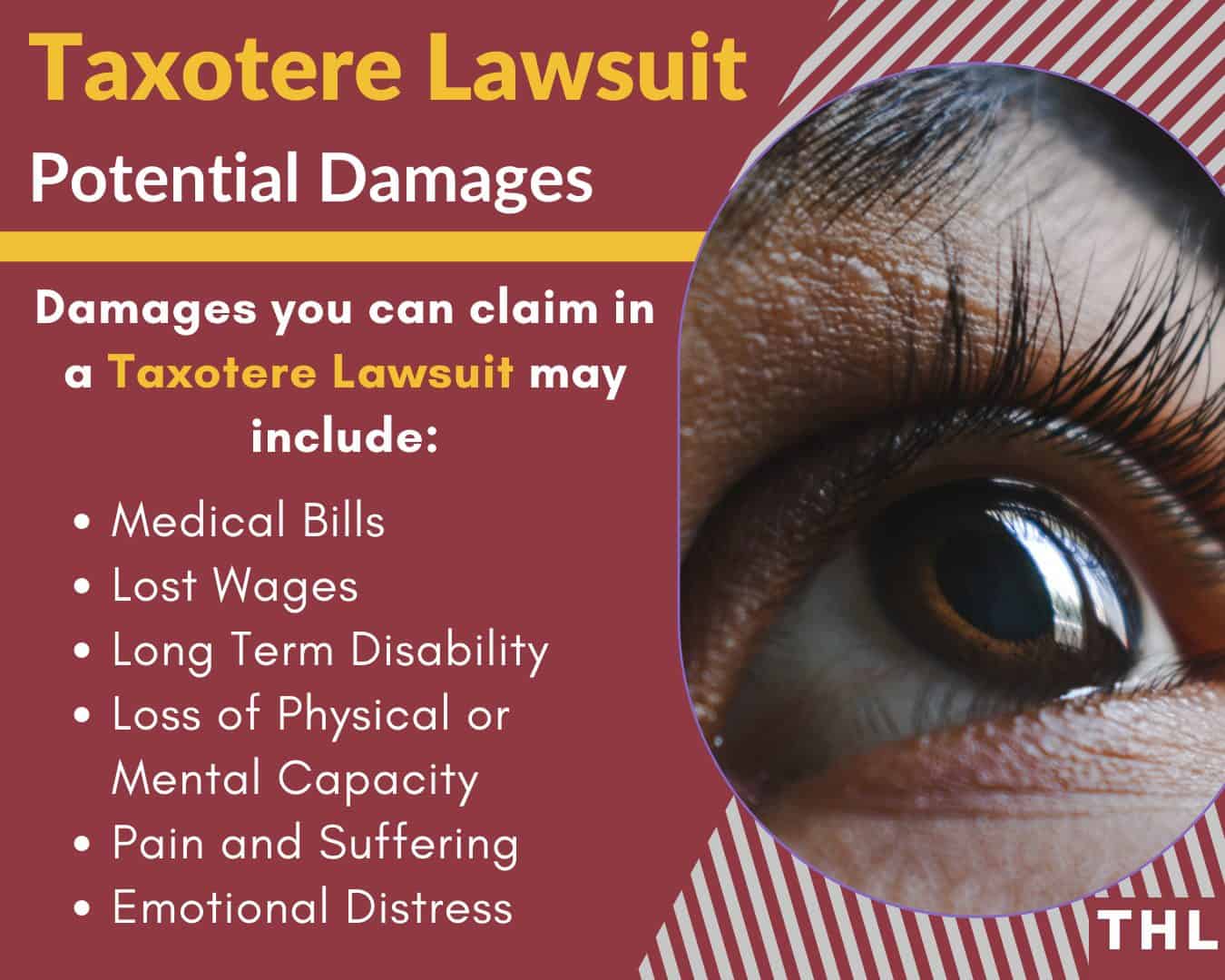 Assessing damages that you incurred from your injuries is another important step to take with the help of an experienced attorney.

Damages include all economic and non-economic losses incurred as the result of an injury.

Damages can include medical bills, lost wages, pain and suffering, and more.

Your state’s statute of limitations limits the time you have to file a Taxotere lawsuit after your injuries first became apparent and/or were diagnosed, so be sure to reach out to a Taxotere lawyer as soon as possible to start the litigation process. 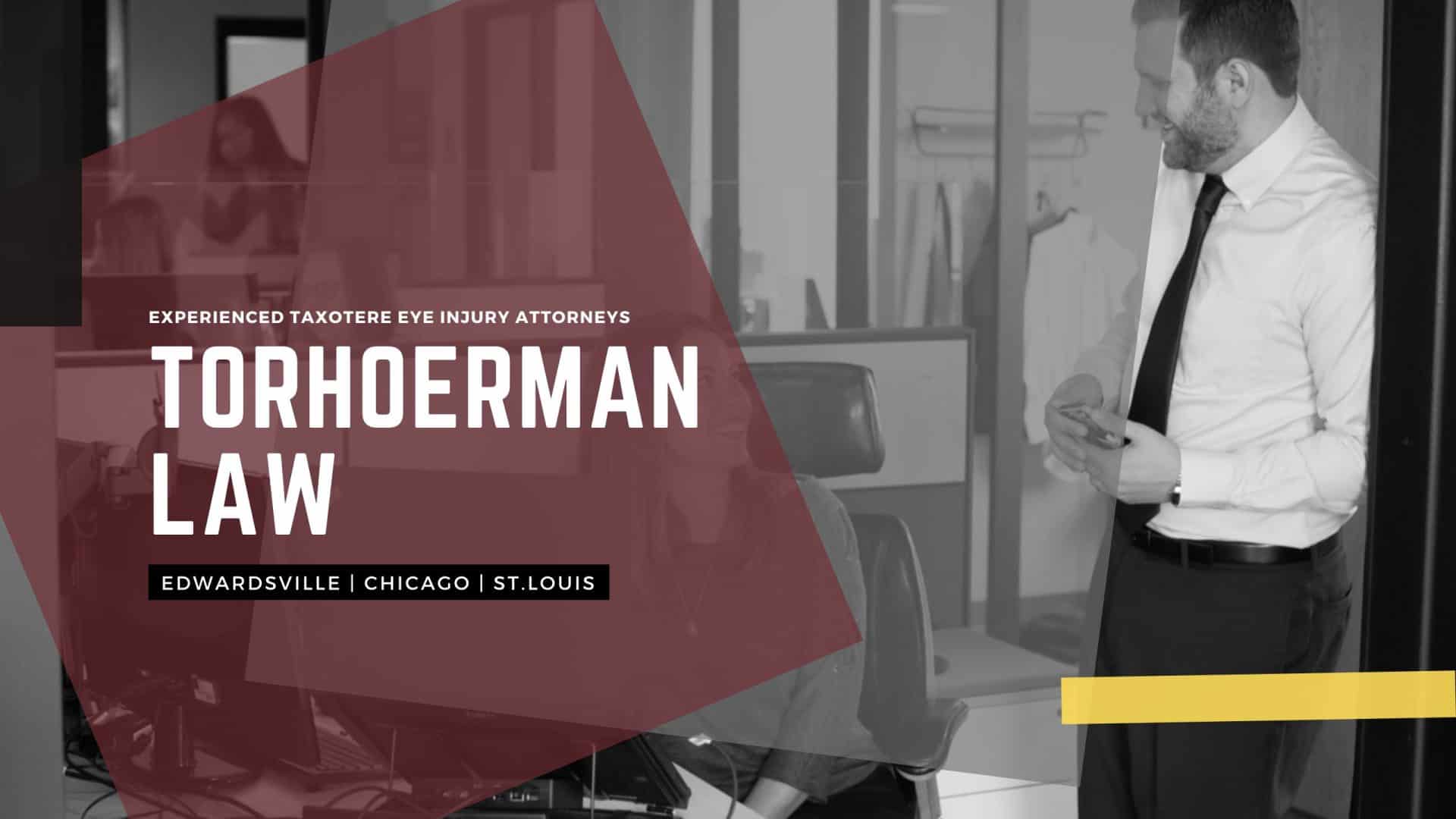 TorHoerman Law has a dedicated team of bad drug lawyers who are experienced at litigating on behalf of individuals who suffered injuries and losses at no fault of their own.

Our firm offers free, no-obligation case consultations to anyone who needs legal advice and guidance related to Taxotere eye-injury and other Taxotere injuries.

We operate on a contingency fee basis, so our clients do not ever pay any legal fees until after they have been awarded compensation.

No compensation? No fees.

So, contact TorHoerman Law, your Taxotere vision injury lawyer, and learn how we can serve you today.