If your child suffered a birth injury in a Chicago-area hospital, you should contact a Chicago birth injury lawyer right away. You may be eligible to take legal action against the individual or hospital at fault.

Filing a Chicago birth injury lawsuit can not only provide you with compensation for your child’s injuries, but it may also help to prevent future injuries to other newborns.

Consider hiring the best personal injury lawyer Chicago has to offer for your birth injury case. While you care for your child and they recover from their injuries, we will be fighting hard for your case in court.

How much is would a Chicago birth injury cover?

This is a difficult question to answer as it is completely dependent on the individual case. But, it is a very common question and completely reasonable to wonder how much you would receive. The short answer is that your case value depends on the number of damages you and your child suffered. However, it is important to discuss this with your Chicago birth injury lawyer.

Who is at fault for my child's injuries?

This is a complicated question because there are a few different factors at play. Your Chicago birth lawyer is better equipped to answer this question once they have more details specific to your case. Generally, the hospital and/or medical provider is held responsible.

Why types of damages are covered in a Chicago birth injury lawsuit?

Damages can include a variety of costs including medical bills, future expected medical bills, living aid costs, the parents’ lost wages, and non-financial costs, such as loss of life.

Doctors and medical professionals have an obligation to ensure newborn babies are delivered with high-quality attention and care. Unfortunately, medical negligence and malpractice during delivery can cause severe birth defects and injuries. Injuries sustained during labor can affect a child for life while the family is left to deal with legal and financial challenges. While a birth injury can be emotionally distressing and financially taxing, Chicago area families have resources for care, treatment, and legal representation.

What is a Birth Injury?

A birth injury is any physical damage a baby suffers before, during, or soon after labor. Most birth injuries are not serious and heal themselves over time, but some can be more severe and lead to lifelong complications. Birth injuries have become less common because of improvements in medical care, technologies, and prenatal assessments.

Birth injuries can be caused by the natural birth process or from medical malpractice. Birth injuries are most common in premature births, during an intensive or long labor, when the baby is very large, or when practitioners use medical devices such as forceps or vacuum. 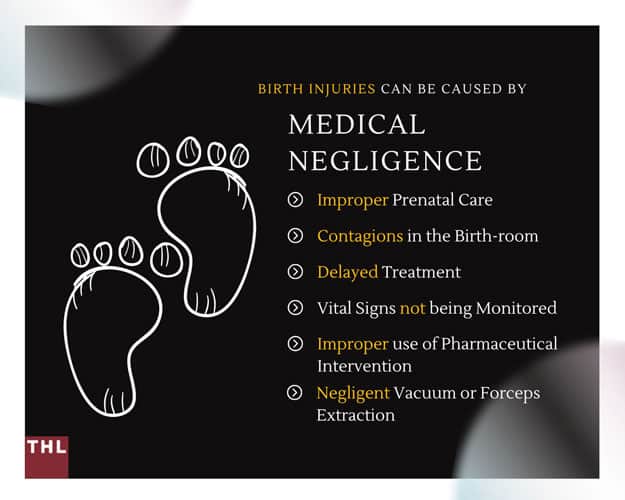 The most common birth injuries in Chicago hospitals include:

Brachial palsy results from damage to the brachial plexus, the network of nerves responsible for controlling the arms and hands. A brachial plexus injury affects an infant’s ability to rotate or flex the injured arm. Brachial palsy can be treated soon after birth with exercises and physical therapies, but the injury can be permanent if the nerves sustain serious damage.

Children delivered by forceps or vacuum extraction can sustain bruises, marks, and lacerations on their bodies and faces. Bruising can also naturally occur when the infant comes into contact with the birth canal or the mother’s pelvic bones and tissues.

Cephalohematoma is bleeding between the skull’s bones and fibrous outer layers. Cephalohematoma can usually be noticed as a lump on the child’s head within a few hours of his or her birth. The lump and bleeding typically heal naturally, but cephalohematoma can develop into jaundice in cases where the newborn suffers severe bleeding.

Heavy pressure on a newborn’s face during labor can cause facial paralysis and nerve damage. This damage can result from natural birth occurrences or from improper use of force or vacuum. Bruised nerves usually heal within a few weeks, but in instances where facial nerves tear, surgery might be required.

Newborns are susceptible to fractured clavicles and collarbones during delivery. The bones can break when there are issues delivering the baby’s shoulder or in cases of breech delivery.

Subconjunctival hemorrhaging refers to bleeding in the eye’s outer layer. The injury is relatively common for newborns and appears as a visible red band in the white portion of a baby’s eye. While the hemorrhaging can lead to eye damage, it usually heals itself within seven to ten days.

Improper care during childbirth can cause developmental delays. Research has shown that newborns who suffer from a traumatic birth face increased risks of developing autism, cerebral palsy, and other developmental disorders. The development of these disorders during labor can seriously affect a child through the rest of his or her life.

Cerebral palsy is a developmental disorder that affects muscle development and movement. It occurs when the brain cells that are responsible for muscular tasks are damaged or do not adequately develop. Children who have cerebral palsy typically struggle with walking, balancing, maintaining posture, and many fine motor skills. Cerebral palsy can be caused by a number of mistakes before, during, or after delivery. Newborns can develop cerebral palsy if the delivery staff fails to identify fetal distress, does not resuscitate a child deprived of oxygen, or in cases where an obstetrician writes a pregnant mother an incorrect prescription. Numerous other mistakes made during labor and delivery can damage a child’s motor cortex.

Autism spectrum disorder characterizes a wide range of developmental issues identified by issues with communication, socializing, and repetitive and restrictive behavioral patterns. ASD can affect each person in different ways, and the symptoms range from mild to severe. Birth injuries can lead to the development of autism. Researchers have found that newborns who suffer complications before and during labor are more likely to develop autism spectrum disorder. Researchers at Kaiser Permanente found that babies who had complications during delivery are at a 10 percent increased risk of developing ASD. Researchers have also discovered that an increase in the number of complications during labor correlates with an increased risk of developing autism spectrum disorder.

“What Is a Birth Injury?” Cerebral Palsy Group, cerebralpalsygroup.com/cerebral-palsy/birth-injury/.

We'll Help You Balance The Scales of Justice