Researchers have discovered a link between the Belviq weight loss supplement and pancreatic cancer risks.

Want to find out if you qualify right now?

Use our chatbot below to get an instant online case evaluation for free!

What adverse reactions can occur when taking Belviq?

The FDA recommended people cease consuming the drug after finding ties to increased cancer risks, but it can cause other harmful effects as well.

Other Belviq side effects include:

What kind of cancer does Belviq cause?

The FDA requested the recall of Belviq and Belviq XR because of increased rates of cancers tied to the drug.

Why was Belviq discontinued?

FDA officials said the Belviq’s cancer risks are significant enough for the agency to call for the removal of the drug.

Since the approval of the drug, researchers have been conducting a five-year study to analyze the medication’s safety profile.

Belviq (lorcaserin), a popular weight-loss drug, has been tied to increased occurrences of pancreatic cancer.

In February of 2020, the U.S. Food and Drug Administration (FDA) requested that Eisai Inc., the drug’s manufacturer, voluntarily withdraw the medication from the market.

Since its recall, families across the United States have filed Belviq pancreatic cancer lawsuits.

The Belviq (lorcaserin) was approved by the FDA for the United States market in 2012.

Upon its approval, the agency required the manufacturer to evaluate the drug’s risks by conducting a randomized, placebo-controlled, double-blind clinical trial.

The study was conducted over a 5-year period with 12,000 patients.

The study, which was published in the New England Journal of Medicine, showed that Belviq use was tied to increased rates of pancreatic cancer, colorectal cancer, and lung cancer.

Researchers found patients who took Belviq had an increased rate of cancer diagnosis compared to those who were given a placebo.

In January of 2020, the agency announced that the trials showed a possible link between Belviq and pancreatic, colorectal, and lung cancers.

The FDA said that they were not able to definitively conclude that lorcaserin contributed to the increased risk of cancer, but a month later the agency decided the potential risks were significant enough to recall the medication.

Lawsuits are now being filed on behalf of individuals who have taken Belviq and subsequently developed pancreatic cancer.

Read on to learn more about your potential lawsuit and legal options. 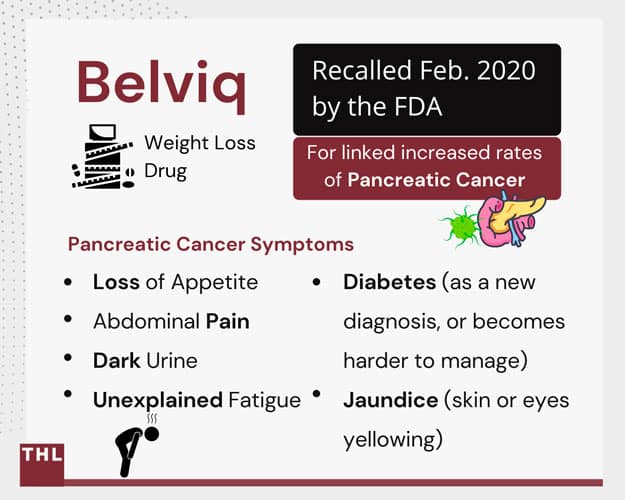 Pancreatic cancer is an aggressive form of cancer that develops in the tissues of the pancreas ­– an organ that sits in the abdomen behind the lower part of the stomach.

The pancreas is responsible for aiding the body in food digestion and controlling blood sugar.

Pancreatic cancer symptoms are often difficult to detect early on.

It’s important to be aware of pancreatic cancer symptoms.

Reach out to a health care professional if you have taken Belviq and develop symptoms.

Pancreatic cancer treatment depends on the patient’s health, preferences, and the location and types of cancer.

Doctors will often work to eliminate cancer if possible, and in more advanced cases, they focus on palliative care (symptom relief)

Pancreatic treatments include surgeries, radiation, chemotherapy, or a combination.

Used to remove tumors of the pancreatic body and tail.

Used for tumors of the pancreatic head

Used to remove the whole pancreas.

Humans can live without a pancreas but will need insulin and enzyme replacements.

Highly specialized and experienced surgeons might be able to remove tumors on these vessels.

The use of drugs that help kill cancer cells.

The use of x-rays and protons to kill cancer cells.

A combination of chemo and radiation therapy.

Chemoradiation is sometimes used before or after surgeries to shrink tumors or stop pancreatic cancer from reoccurring.

The use of a variety of methods to provide relief and support from pancreatic cancer pain and symptoms.

Do I Qualify for a Belviq Pancreatic Cancer Lawsuit?

If you developed other forms of cancer or serious injuries or side effects after taking Belviq, contact a Belviq lawyer to discuss your legal options.

Read on to learn more about filing a Belviq pancreatic cancer lawsuit.

Filing a Belviq pancreatic cancer lawsuit can help you earn compensation for your damages.

Working with a Belviq pancreatic cancer lawyer will help you earn the best possible compensation for your suffering and damages.

At TorHoerman Law, we have an experienced team of personal injury lawyers with years of experience successfully filing bad drug lawsuits for our clients.

Contact us today to learn more about your potential Belviq pancreatic cancer lawsuit and legal options.